News From Us > What is Autoclave Device? 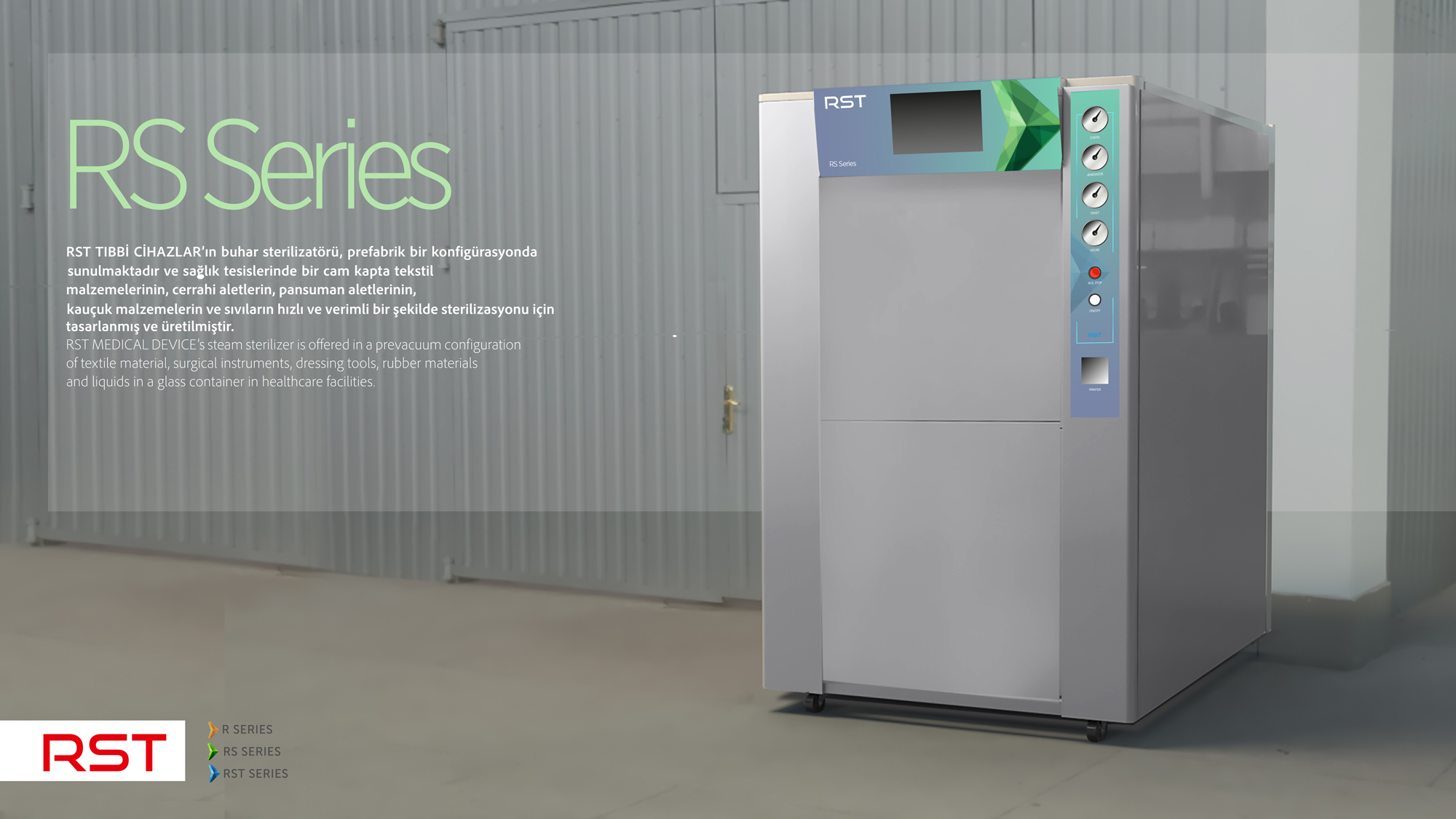 What is Autoclave Device?

The autoclave performs sterilization in 25-40 minutes at 121 degrees Celsius in an environment saturated with pressurized water vapor. It was invented by Charles Chamberland in 1879. The name autoclave is derived from the Greek words auto – self and in Latin clavis (key) and means “self-locking device”.

Autoclave; It is used in laboratories and operating rooms to destroy germs. It is also widely used around the world in canning fruit and vegetables because it destroys germs.

The terms steam sterilizer and autoclave are synonymous and can be used interchangeably. However, the autoclave is often used in laboratory settings, while the sterilizer is more commonly heard in hospitals or pharmaceutical settings.

Autoclaves use steam heat to kill microbial life that can be found in a contaminated load. A load, also known as commodity, is considered sterile after going through a full sterilization cycle. When a load is sterile, it can be used without fear of introducing foreign microorganisms into a sensitive environment such as a laboratory, hospital operating room, food production facility. Different types of products must be sterilized for different times and at different temperatures. Some autoclaves include additional features such as vacuum functions, special loops and integrated electric boilers.

History of the Autoclave

Charles Chamberland invented the autoclave in 1879, but the concept of using steam in a confined space to prevent disease has existed in some form since 1679.

In order to kill a cell with heat, it must be raised to an extent that proteins in the cell wall break down and coagulate. Steam is a very effective medium for heat transfer, making it a great way to destroy germs. On the other hand, air is a very inefficient way of transferring heat / energy due to a concept known as evaporation heat.

It takes 80 kilocalories (kcal) of heat energy to bring one liter of water to boiling point (100˚C). It takes 540 kcal to convert this liter of water into steam, which means that steam at 100˚C contains seven times more energy than water at 100˚C.

This energy is what makes steam much more efficient at destroying microorganisms. When the steam encounters a cooler object, it condenses into water. It then transfers all the energy used to boil the water directly into the water. This process heats the cells much more efficiently than air at similar temperatures. That’s why we use steam to achieve sterility.

Most people have a working understanding that sterile products do not contain microorganisms and are therefore safe for use in medical, food production, research or other settings where the presence of microbes would pose a significant safety hazard or harm.

Exactly, how many microorganisms will survive over time at a constant temperature is expressed as a probabilistic logarithmic curve – a function that approaches zero but never reaches zero. (see Figure 1).

As the function approaches zero, a confidence level, typically called the Sterility Assurance Level (SAL), is chosen for the survival probabilities of the last microorganism present. Contrary to popular belief, sterilization is not dual when something is sterile or non-sterile. Sterilization is a statistical event characterized by this confidence factor (SAL). The general standard for SAL is 10-6, or the survival chance of a single living microorganism is one in a million. How long the sterilization will take depends on the set temperature and the desired SAL level; higher temperatures will reach sterility faster.

How Does an Autoclave Work?

Whether it’s a small tabletop unit or a room-sized batch unit, all autoclaves operate using principles similar to a common kitchen pressure cooker – that is, the door is locked to create a closed room and all the air in that room is exchanged. steam by. The steam is then pressurized to bring it to the desired sterilization for the desired time. When the cycle is complete, the steam is used up and the products can be removed.

For a more detailed explanation of the various stages of a sterilization cycle, please refer to the list and picture (Figure 2) shown below:

2. Exposure (Sterilization) Phase: At this stage, the control system of the autoclave is programmed to close the exhaust valve, causing the internal temperature and pressure to rise to the desired set point. The program then maintains the desired temperature (standby) until the desired time is reached.

3. Exhaust Phase: Pressure is released from the chamber through an exhaust valve and the interior is returned to ambient pressure (although the contents remain relatively hot). 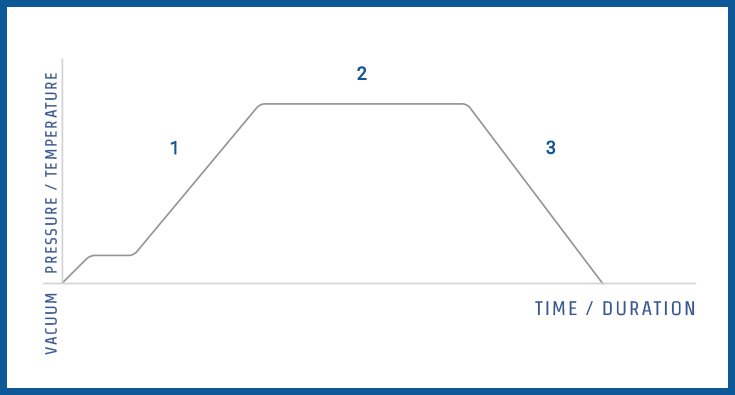 The typical laboratory autoclave consists of the following components (Figure 3): 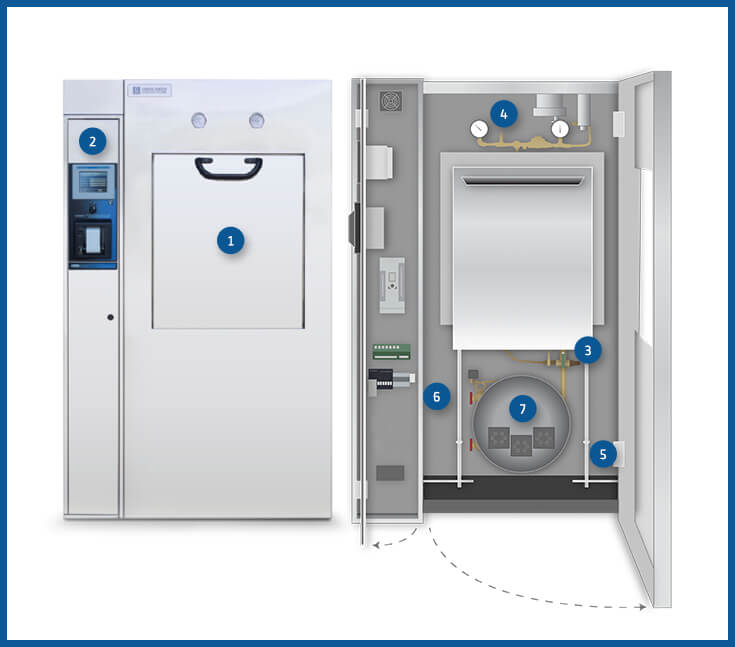 The casing is the main body of the autoclave and consists of an inner chamber and an outer jacket. Laboratory and hospital autoclaves are constructed with “jacketed” chambers (see Figure 4) in which the jacket is filled with steam, reducing the time taken to complete a sterilization cycle and reducing condensation inside the chamber. A container designed and manufactured with a full jacket is superior to that of a partial jacket or covered jacket for the following reasons: A full jacket improves temperature uniformity within the chamber, reduces the likelihood of wet packs and helps minimize wet vapor. not good for sterilization. [

In the United States, every autoclave vessel is inspected and labeled with an American Society of Mechanical Engineers (ASME) nameplate containing a National Board number. Manufacturers are required to hydrostatically test each container and apply an ASME nameplate before putting an autoclave into service. This inspection and ASME nameplate are key indicators of a properly functioning autoclave.

Laboratory and hospital autoclave containers can range in size from 100L to 3,000L and are typically made of 316L stainless steel. Internal baffles are either 316L or nickel plated, and outer sheaths are made of 316L, 304L stainless steel or carbon steel.

All modern autoclaves are equipped with a controller interface that is not unlike what you will find in a microwave or oven. However, autoclave control systems tend to be slightly more complex than household appliances. The sterilization cycle follows a pre-programmed software formula that turns valves and other components on and off in a specific order. Therefore, all autoclaves require some type of control system, be it as simple as a “push button” system with a microprocessor or as complex as a programmable logic controller with a color touch screen.

All autoclaves contain a type of thermostatic trap or steam trap, which is a device designed to allow air and water (condensation) to escape from the room. While a steam distribution system / steam autoclave can use a variety of traps, they all perform the same basic function: removing condensation while preventing the passage of dry steam. Often times, steam traps are temperature sensitive valves that close when a certain set point heats up. Thermostatic traps are a critical component of any well-designed autoclave.

All autoclaves operate under high pressure (14–45 pound-force per square inch) and therefore must be built with an incredibly robust construction and equipped with a range of safety features and devices to ensure they do not pose a danger to users. One of these safety devices is the safety valve, which is the last fail-safe device for the pressure vessel in case all electronic controls fail. It is imperative that the safety valve is inspected, tested, and verified to be in proper operating condition according to the recommendations of the sterilizer and / or valve manufacturer, as well as local inspection and insurance agents.

Most autoclaves are equipped with a system for cooling waste water (air, steam, and condensate) before it enters the drain pipes. Many municipalities and buildings do not allow wastewater above 140˚F to enter the floor drain. The steam must be cooled before it is sent downstream from the draw to avoid damaging the plant’s drain pipes. The simplest method of cooling this vapor is to mix it with additional cold tap water, but the amount of water required can cause an autoclave to contribute greatly to a building’s water use. Some autoclaves are equipped with systems designed to reduce or even eliminate water consumption.

To ensure correct sterilization, it is very important to replace all the air in the autoclave chamber with steam. Some commonly sterilized items – particularly porous materials such as animal bedding or cloths, or containers such as bottles or bags with small openings – tend to hold air pockets. If there is an air pocket during the cycle, any microorganisms within that pocket will survive and the products will not be sterile.

For this reason, many sterilizers will have a vacuum system. This not only allows the user to force air out of the chamber using a vacuum (known as pre-vacuum) before a cycle, but also allows them to use a vacuum after the cycle (known as post vacuum) to remove any vapors. to dry goods remaining in the chamber and in the autoclave.

The most common source of steam for an autoclave is a central “home” boiler. However, if household steam is unavailable or insufficient to autoclave, then an electric steam generator, also known as a boiler, should be used. These boilers typically sit under the autoclave chamber and have electric heating elements to heat the water and generate steam.